Brands have an unprecedented opportunity to utilize virtual and augmented reality to drive incredible business results. To study this, we partnered with YuMe, Isobar and RetinAd to measure brand recall and biometric response to people playing our game, Kiss or Kill.

Read on to learn about the most effective ways to use ads in VR. 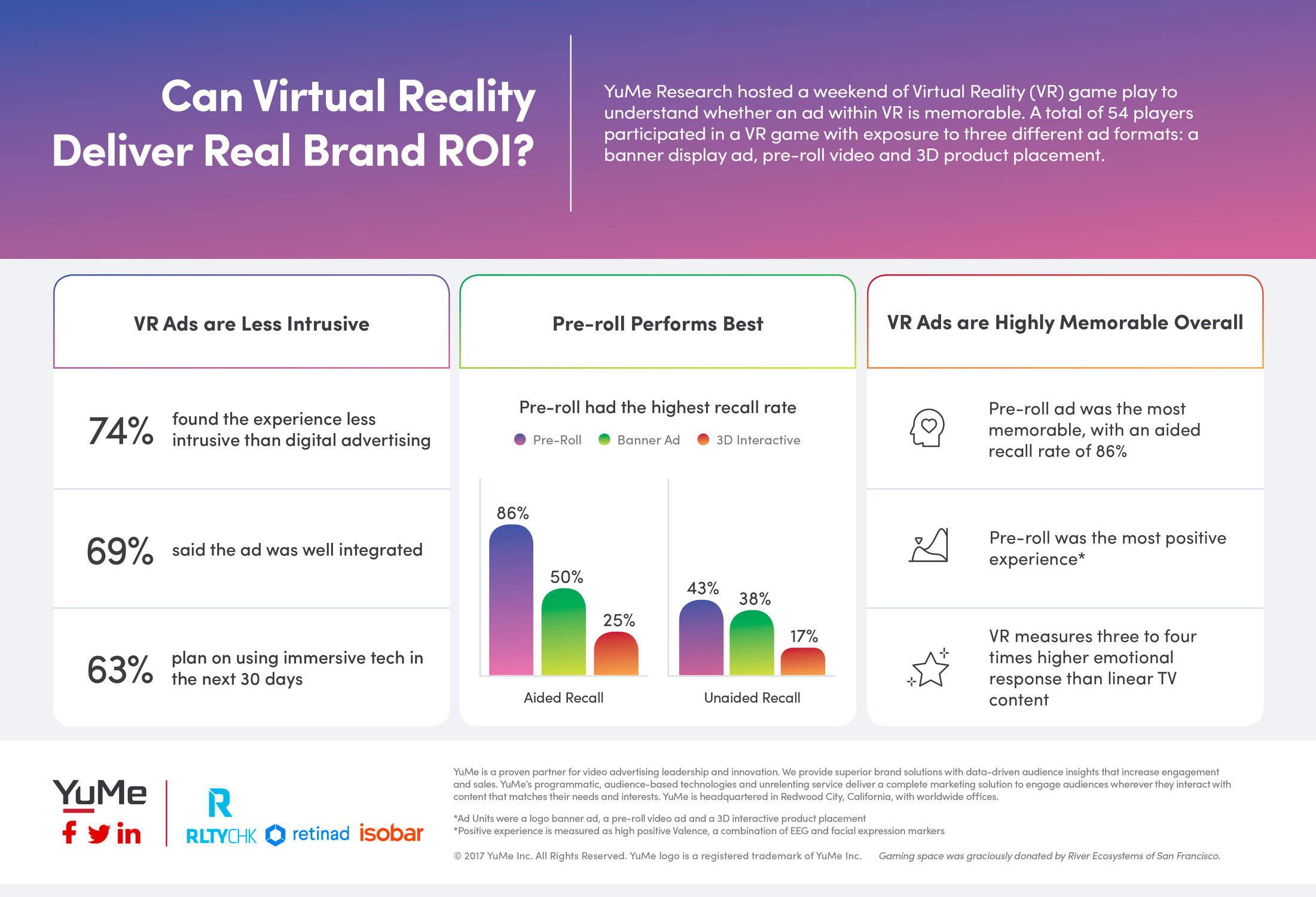 “We believe our study indicates that VR advertising is highly memorable in any format. It’s encouraging to see that a video ad, the most familiar and high-performing digital format, also delivers the highest rate of ad recall in the VR world,” said Mireya Arteaga, Research Lead, YuMe. “We believe immersive advertising is on the rise. Its ability to deliver a compelling branded-content message that is interactive, engaging and offers consumers the ability to own their ad experience is very attractive to today’s advertisers.”

Key takeaways from the study include:

“We believe the strong emotional engagement of VR gaming provides a great context for placing advertisements,” said Jeremy Pincus, Ph.D., Vice President at Isobar. “We see strong emotional engagement in both the overall experience and during exposure to each of the ad units, as measured through multiple biometric channels, including brain waves, facial muscle contractions, skin conductance, and heart rate changes.”

“By combining our immersive VR game show format with strategically-placed ads, both players and brands can win,” said Nick Robinson, CEO, RLTYCHK. “VR enables marketers and developers to reimagine brand experiences, and the positive recall metrics show how effective VR can be in engaging audiences.”

Alexander Haque, CEO of Retinad Analytics added, “VR and AR, while nascent marketing platforms, can help brands effectively tell a story to their customers, helping them connect with their consumers and keep their name top-of-mind. This study demonstrates the potential effectiveness of in-game VR advertising and how brands should approach this medium.”

Additional insights from the VR advertising study can be found within YuMe’s report, companion video and infographic here. Learn more about Isobar’s measurement platform here. In addition, a free webinar on the research findings entitled, “Transforming a Virtual Ad Experience into a Real World Memory,” is scheduled for Tuesday, October 24 at 10 am PT. To RSVP, click here.

In conducting the VR advertising study, a total of 54 participants based in San Francisco, California were recruited to play “Kiss or Kill,” an immersive VR game show created by RLTY CHK, with CPG advertising included in three formats: video, branded logo in-game insertions and 3D branded objects included in interactive game play. Participants were monitored during game-play by Isobar to collect key emotional response data. Immediately after the game, and again 24 hours later, participants were surveyed by YuMe to measure ad recall and understand consumer response to the various forms of VR advertising they were exposed to. RetinadVR audited and provided input to the survey methodology, study execution, and the data analysis.